What a fun filled weekend was had at the farm, it was my eldest little farmer Tegan’s 12th birthday (shocking I know, I’m old enough to have a tween). So I told her she can have a big birthday bash this year, with all her friends as she’s not having anymore until she’s 18 at least.

So on with the thinking caps and we thought an Emoji party was a perfect theme as who doesn’t love an Emoji?

I mean everybody must send one out everyday to somebody. I know we do in this house especially Tegan, from laughing faces to grumpy faces or just plain old poop!!

The difference in this year’s party though was Tegan was inviting BOYS!! Pressure! Girls are happy chilling and taking selfies, but boys in my eyes are a lot more easily bored. So I had to figure out how to keep the boys and girls amused at our tiny farmhouse for 3 hours.

So I did what I love to do, I transformed the barn into a party/disco room in case of bad weather, good call Jade as it pissed a few times. My mum has been a dress maker all her life, she has an Aladins cave of material so I popped in and picked up some yellow fabric, just enough to cover the whole shed (HIDE THE SHITE). I added some fairy lights over and back the roof for added ambiance lol.

I printed out some Emoji’s and speech bubbles full of Tegan related hashtags, like her football club #ICFC, #12thbirthday, #food, #bestpartyever etc and I pinned them all around the material, just to add fun to the room. I picked up Emoji plates, napkins and bowls for the sweets and food from Super Savers in Buncrana 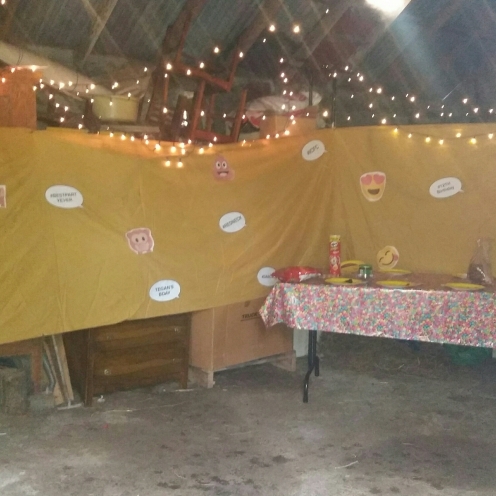 The cake WOW WOW WOW!! It was class, the very talented baker from The Lily Rose custom made Tegan a chocolate biscuit cake with none other than an EMOJI! It tasted as good as it looked too. What diet? 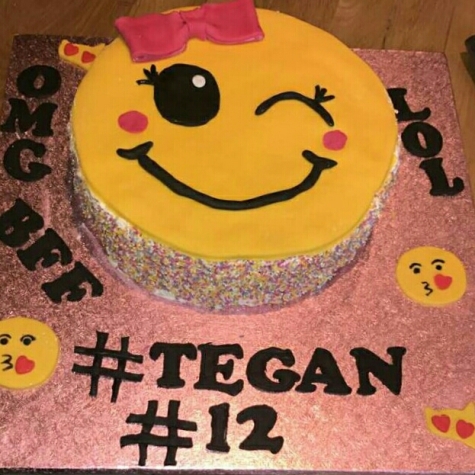 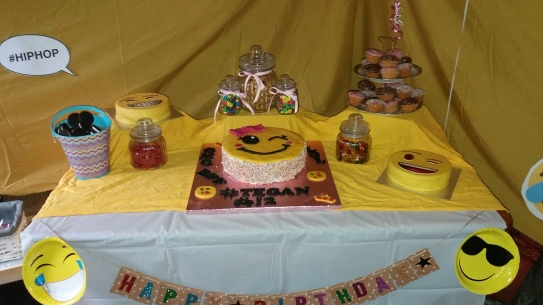 The cake sat centre stage on the sweetie table, which was full of kids favourite sweet stuff like M&M’s, jelly babies, snakes, Oreos etc. I picked up the cute jars in Home bargains, Derry.

Now for the fun! I had all the kids line up, all 30 of them and gave them all a number from 1-5, split them into groups so they each had a team. When in teams I made them make up a name Tegan related for their team we got some funny ones like “Two foot Tegan” haha I did laugh poor Tegan.

Each team member had to take turns at certain games while we took score 5 points for winner, 4 points for 2nd and 3 points for runners up.

1st up we had cookie face. Each team had one player that had to get a cookie from their forehead to mouth with no hands just facial expressions, it really started the games of with excitement and laughter.

We then had tug of war! That was a real competitive round. War against teams and it was tight!

Then we played donut swing, each player had to eat a donut without hands hanging from string. It was a lot harder than they thought, but tasty I’m sure.

Indoors we did penny stack, players from each team had to stack as many penny’s as they could in to towers. Who ever stacked highest won. 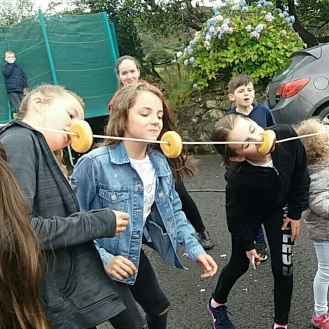 My fav game was pin the poop! I drew a toilet on a big sheet of paper and printed poop Emoji’s. Turned the players 10 times, and let them go blind folded, who ever was closest to where the poop was meant to be won.

There was a few other games but unfortunately we didn’t get to do them as we run out of time and quite frankly the kids were getting too excited and rowdy. So we played one last game before all the parents arrived. The penultimate game especially for the boys.

This was really easy to do and so much fun. We originally had hay bales arranged to make a football pitch but the rain put a dampener on that, so we tied rope over and back the street. Did the same job.

7 players aside, 1 in each net, 3 in defence and 3 attackers. The kid’s had to hold on to the rope, no letting go. It was so fun although we didn’t manage to take scores as everyone was that excited. I am seriously gonna have to plan an adults version, I was jealous lol.

Over all it was a great day and if your planning on having a party for kids I really recommend an Emoji party with group games. It was definitely the best one yet. Roll on Halloween for Darcy’s 1st birthday party. That will be spookily fun.

P.S If you follow me over on Snapchat or Instagram, you would have seen all the fun if not you can add me here.